Skip to content
Posted on 17 Jul 2016 by Stephen Clancy 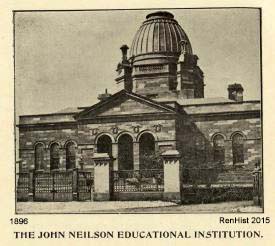 From its central and commanding situation on Oakshawhead, as well as from its great architectural beauty, this Institution must be reckoned among the three or four most notable of Paisley’s public buildings. The fund of about £20,000, from which it was erected, was bequeathed by the late John Neilson, Esq. of Nethercommon, in 1839. The trustees chief of whom was Mr Neilson’s nephew, the late Mr Arch. Gardner, Writer – had unlimited powers in carrying out the wishes of the donor, and the fund accumulated for years before active steps were taken in the way of building, so that the original bequest was left as an endowment fund. The best site in town was secured – used at the time as a bowling green; and Mr Charles Wilson, Glasgow, was engaged as architect. Local tradesmen worked so well under his direction, that very soon a building, which is “the admired of all beholders,” reared its noble proportions where of old the Roman Generals surveyed the densely wooded plains surrounding their fortress.

The school was opened in 1852. The curious may discover that date carved, and almost concealed, so ingeniously is it devised, among the rustic courses of the wall to the left of the main entrance. The school is under the management of trustees, and provides accommodation for 1200 pupils, 120 of whom are on the Foundation, the others being fee-paying scholars. The educational work is carried on by eight masters and six: mistresses, besides visiting masters, and has always been of a very high order. The visitor will do well to examine this fine structure. It is built in the form of a Greek Cross, with a singularly beautiful and effective dome rising from its intersection, and is a commanding object in every distant view of the town.

From the 1896 Guide to Paisley published by J & R Parlane