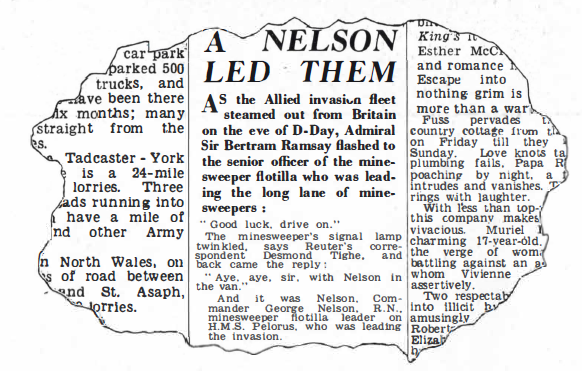 Lobnitz shipyard in Renfrew mostly built and specialised in Dredgers and Dregde equipment for clients worldwide. During World War II the construction of dredgers continued, though mostly for Admiralty contracts.

The bulk of their work during war time was for the Admiralty be it the construction of minesweepers, Boom Defense Vessels, Landing Craft and Navel Armament Vessels to fitting out, converting or repairing Frigates, Hopper barges, and other Navel vessels as required.

One of their mine Sweepers – HMS Pelorus J291 – was ordered on the 1 January 1942. She was laid down on the 8 October andwas launched on 18 June 1943 and completed two months later on the 7 October 1943. The minesweeper was attached to the 7th Minesweeping Flotilla.

The 7th Minesweeping Flotilla was assigned clear mines on the east coast of England until late May 1944 when they were then assigned to sweep the minefields protecting Juno Beach during the Normandy landings.

HMS Pelorus led the Minesweeping Flotilla, and on the the 6 June 1944 became the leading ship of the entire D-Day invasion fleet.

Mulberry ‘B’ Port or Harbour

A better kown part of the D-Day Landings were the Mulberry Harbours. Many places and companies claim to have been involved in the design and building of the Mulberry’s but the true story lies closer to home, and again with Lobnitz of Renfrew. The following, taken from the same catalogue as the imag above about HMS Pelorus tells the story of how Lobnitz came to awarded the design contract and how every Mulberry constructed in other firms was built under direct control of a Lobnitz represenative!

Mr. Churchill has made many famous utterances but none more thrilling than: “Piers for use on beaches: They must float up and down with the tide. The anchor problem must be mastered… Let me have the best solution worked out. Don’t argue the matter. The difficulties will argue for themselves.”

He remitted the matter to the War Office and gave them the problem to think out. It was absolutely unique in the history of warfare or in any other history for that matter. The problem was one of first of all providing landing pontoons or pierheads linking these all together by floating roadways, say anything up to 1 mile from the shore, and providing roadways from the pontoons themselves right to the shore. The problem was how were these pontoons to be fixed in position so as to be a terminal for the bridge spans and so that vessels could come alongside them unobstructed by any moorings.

The preliminary responsibility for putting the scheme into operation was the job of Brigadier Sir Bruce G. White, K.B.E., R.E. The interesting point at this stage is that he at once associated the idea of this floating pierhead arrangement with a dipper dredge of Lobnitz construction which, during a violent storm at the Bahamas some years ago, had safely ridden out the extreme weather conditions whereas every other craft had been washed ashore. The unique point about the Lobnitz Dipper is its spud arrangement, these spuds being long columns going right down through the craft with their feet resting on the sea bed. Brigadier Sir Bruce G. White accordingly got into touch with Mr. Pearson Lobnitz and submitted the entire problem.

It was precisely the type of problem to which the Lobnitz organisation could bring to bear the necessary knowledge and enthusiasm. A prototype was designed by our engineering staff without delay and just as soon as they were satisfied as to its workability the steelwork construction of it was sub-contracted to Messrs. Redpath, Brown & Co., Ltd., and the erection to Messrs. Alex. Findlay & Co., Ltd. This prototype, although it was on paper only in December 1942, was on its experimental station in the Solway Firth by April, 1943. You see it depicted on the illustration on this page. A truly remarkable performance when it is considered that almost 1,000 tons of steel was involved as well as the very heavy winches for operating the spuds with the attendant Diesel-electric gear and controls, all which mechanical portions we manufactured and fitted. This feat could never have been accomplished without the very close co-operation of all concerned, and a very large measure of this achievement is due to the immense energy that was displayed by the late Mr. P. W. Robson, then Chairman of Messrs. Alex. Findlay & Co., Ltd. This prototype was thoroughly tested in the Solway over a period of 13 months under the rigorous conditions of tide and storm encountered there and was found eminently satisfactory in every way. Approval was given to the wholesale construction of the pierheads throughout the country. At these building sites, all the technical requirements involved were under the direct supervision of Lobnitz representatives.

There were more kinds of vessels sent out on Invasion Day and the days that followed than the layman knew of. Large concrete caissons, block ships, etc., were all positioned to form the breakwater within which the pierheads were to work. On the way out the British formation of pierheads were all towed over successfully. Two ports were set up; one for British use and the other for American use. They were partly complete when the violent storm, said to be the worst in some 40 years, blew up and the American port came to grief, although the British port was again in operation immediately the storm subsided. It is interesting to record that one of the spud pierheads was actually outside the breakwater at the American port during the entire gale, and by spudding up to its maximum, so that the waves, which were reported to be 10 to 12 feet high, had no effect on the hull, this pierhead withstood the full force of the gale even though it had no protection whatsoever.