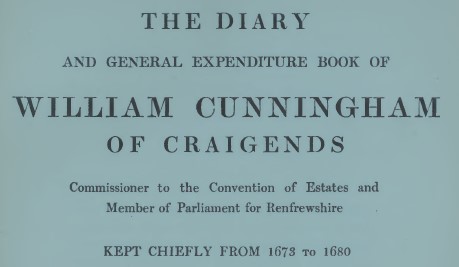 I’ve just been reading the THE DIARY AND GENERAL EXPENDITURE BOOK OF WILLIAM CUNNINGHAM OF CRAIGENDS, Commissioner to the Convention of Estates and Member of Parliament for Renfrewshire which was kept between 1673 and 1680. The time period falls directly into the Covenanting time period, which was also subjected to harsh harvests leading to impoverished times. The diary and account book of Wiliam Cunningham frequently indicates donations to the poor and beggars of the area amongst other things.

The following song is attributed to Richard Brome appears in a black-letter copy of the Bagford Collection, where it is entitled The Beggars’ Chorus in the ‘Jovial Crew, published in ANCIENT POEMS BALLADS AND SONGS OF THE PEASANTRY OF ENGLAND edited by ROBERT BELL in 1857. It really describes the life of a beggar in the late 17th Century.

A bag for his oatmeal,
Another for his salt;
And a pair of crutches,
To show that he can halt.
And a begging, &c.

A bag for his wheat,
Another for his rye;
A little bottle by his side,
To drink when he’s a-dry.
And a begging, &c.

Seven years I begged
For my old Master Wild,
He taught me to beg
When I was but a child.
And a begging, &c.

I begged for my master,
And got him store of pelf;
But now, Jove be praised!
I’m begging for myself.
And a begging, &c.

In a hollow tree
I live, and pay no rent;
Providence provides for me,
And I am well content.
And a begging, &c.

Of all the occupations,
A beggar’s life’s the best;
For whene’er he’s weary,
He’ll lay him down and rest.
And a begging, &c.