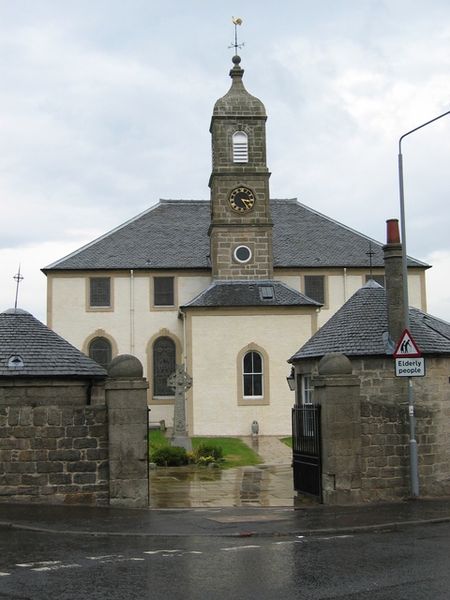 Today not many people think of Neilston as being part of Renfrewshire. It sits in the modern day council area of East Renfrewshire, which was separated from the old county of Renfrew along with inverclyde at the last local government reform.

It is said that Neilston derrives its name for a person called Neil, who settled in the4 vicinity of the parish church in antiquity and called his settlement ‘Neils-toun’. One of the first written records for Neilston comes in 1227 when the church of Neilston is granted to Paisley Abbey by William de Hertford (any guesses as to where he was from?) in return for half of the corn tithes of Thornton. This grant was confirmed in 1227 by the Bishop of Glasgow and Pope Honorius. An agreement between the Paisley monks and the Bishop of Glasgow allowed the church to be used by the Abbey for its own purposes exempt any financial demands from the Bishop or See of Glasgow.

The Abbey held the church of Neilston until the reformation. They employed a curate to hold regular services and took the income from the church to help support the Abbey. The surviving rental books for Paisley Abbey show that the properties of the church of Neilston were leased out to the value of £66 13 shillings and 4 pence per year. From the reformation, until 1587 it was held by Claud Hamilton, the last Commendator (Lay Abbot) of Paisley Abbey. In 1587 the entire estate of Paisley Abbey was given to Claud Hamilton as a heritable Estate, and he took the title Lord Claud Hamilton. The estate of Paisley Abbey, including Neilston, was inherited by Claud’s grandson, James Earl of Abercorn who then sold the estate in 1652 to the Earl of Angus. Within a year the lands had been sold on again to William, Lord Cochran in 1653.. The patronage of the church at Neilston was acquired by Alexander Speirs of Elderslie in 1775.

The current Parish Church was built in 1762, with it’s spire and clock. The Village held four annual fairs and was home to 472 individuals in 1791, by 1821 the population had almost doubled to 800. Within the parish itself, there were other manufacturing villages, with the population of Parish in 1755 being 1299 individuals, rising to 6548 individuals in 1821.

© Copyright John Allan and licensed for reuse under this Creative Commons Licence.